NHY was working - of course!

I should of course explain: in a previous post I bemoaned the fact that NHY would not start, and her trip to Duxford looked in doubt. However, David Hoare to the rescue, and on the Thursday before the event, he went over to Keynsham storage and got her going (an air lock), and changed her oil (to replace the oil and water mix!!), which is why she was able to rake part - and perform beautifully! If an AVW engine with a cracked block can perform that well, just imagine how a perfect one performs!!
Posted by Dr Mike at 03:43 No comments: 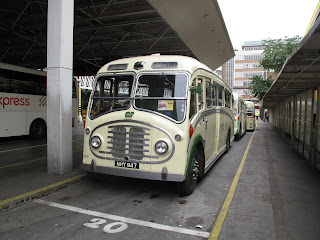 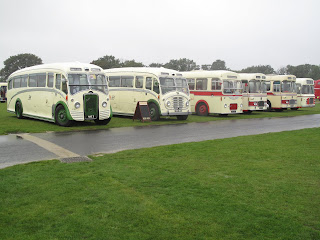 Email ThisBlogThis!Share to TwitterShare to FacebookShare to Pinterest
Labels: Duxford in the rain. Our coaches with Ian Mahoney's MW and Carl Berry's RE

Another epic weekend trip to Duxford, and a succesful one in many ways.

In the event, the party less BHU left Burnett at 1230 and went straight to Reading Services where it joined BHU, which had worked up from Swindon following its private hire. We continued to Birchanger Green, arriving at 1830.

An early start on Sunday and we were in place at Showbus by 0900.

Another Collection vehicle slipped in to the event almost un-noticed: Gary Williams had called on Friday to say that his Volvo B10M had broken down and asked to take blue Olympian "Sir George White" - 9552 - to the show, and she made it up on Saturday and back on Monday without incident.

The event was as large as ever, and the two L coaches operated a free service to Duxford village at 1245, with the two MWs following at 1330, both appreciated by those who travelled on them.

Then came the rain, which put a dampner on the rest of the day, resulting in many exhibits and trade stands leaving early.

However, in the pouring rain, I was pleased to be able to accept the award for the best ECW bodied Bristol on behalf of NAE3 - making the long drive up well worth the effort.

On Monday we left Birchanger Green at about 5 to 9 and, led by Derek White in 2815, we went down the M11 and threaded our way through London, arriving at Victoria Coach Station at just on 1100, where we were all ushered on to Bay 20 and, joined by Carl Berry with his "Greyhound" RE, and Duncan Law who had taken time from work for the occassion, we recorded the event on camera.

At 1130 we departed Victoria for the long drive to Reading Services and the A4 through Newbury, Marlborough and Chippenham, home to Burnett, arriving at 5.30.

All four coaches behaved perfectly, and thanks are due to Martin, Derek, and David and Mike from North Somerset Coaches for their stirling efforts in helping to get all four Greyhound coaches through the long weekend!
Posted by Dr Mike at 23:50 No comments:

Good news on NAE3 - the broken camshaft was it seems the only (identifiable) problem, and she should be now be on her way back up from Winkleigh.

Today Malcolm and I went to get NHY947 out of storage so that she could go to Chepstow to have an oil change (she runs better on oil rather than an oil/water mix!) ready for Duxford, but she wasn't having it and it sounds like the fuel is not getting up to the engine - so she had to be left there, and although NAE3 will now go to Duxford, NHY will not!

We took 972EHW over to TDC at Lydney (at just over 30 miles per hour!) for a wooden rear door to be fitted ready for winter storage, and Malcolm brought FHW156D back (no COIF yet) ready for the weekend. The Duxford convoy will consist of NAE3, BHU92C, FHW156D, a Stagoach (Gloucester) RM and a Bath Bus Company 10-plate East Lancs open topper, although the convoy will probably not join up until Chevely services, since David fricker is using BHU on a private hire in Swindon on the way up, and all but NAE3 will probably not leave until lunchtime!
Posted by Dr Mike at 09:23 No comments: 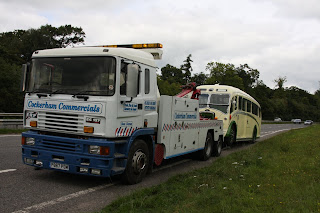 Email ThisBlogThis!Share to TwitterShare to FacebookShare to Pinterest
Labels: An uplifting experience for NAE3 last Saturday

Oh dear, a not so good weekend. Whilst our friends at Bath Bus Company were having another excellent weekend with their service to Imber, NAE3, en-route to Kingsbridge, started making some very strange nosies from under trhe bonnet, and after a few miles went bang in a big way! I had driven her down from Burnett on Friday last, September 17th, with no problem, but from starting her up on Saturday she didnt sound quite right, and after a few miles she protested in a most violent way: as I pulled her over into a slip road, she stopped running. A talk with David Hoare and another to Autohome (thanks Autohome), and two and a half hours later she was picked up and towed to Winkleigh. Pete was there and, interested to see what had happened, started by taking the rocker covers off, to reveal a camshaft that had broken clean in two. Further work by Pete will tell if this was the cause of the problem, or simply a result of something more serious. Duxford looks unlikely now for NAE3, but keep looking in to the blog for more information! Luckily BHU92C was ready to bring home after examination by Pete, so I arrived back at Burnett at 7pm!

Tomorrow a number of other vehicle movements take place to get the remaining three coaches, NHY947, BHU92C and FHW156D, ready for the marathon trip to and from Duxford next weekend.
Posted by Dr Mike at 02:28 No comments: 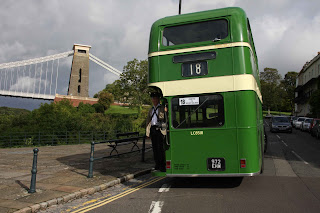 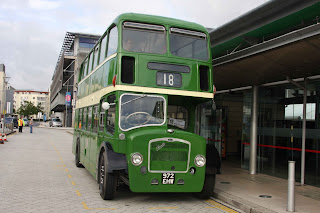 Email ThisBlogThis!Share to TwitterShare to FacebookShare to Pinterest
Labels: LC8518 at Millenium Square today and at The Rocks Railway with "conductor" John Hitchins

Lodekka LC8518 was used for the Bristol Open Doors event today, providing six return trips between Millenium Square and The Rocks Railway. Good loads were carried and the bus was admired by passengers and passers by alike! Malcom Morgan, John Hitchins and I crewed her and it was a very enjoyable day - including snatch changes from first to second and long slow climbs up Park Street!
Posted by Dr Mike at 08:45 No comments:

Not much to report since the last post: there were a number of important events over the last two weeks, but the Collection was not represented - I speak particularly of Merthyr and Wythall - the last particularly being a "Bristol" event.

However, a few things are coming up for which we now have to prepare.

North Somerset Coaches reported some possible difficulties with MW coach 2138 (BHU92C) - surely the most used vehicle in our collection - and she went into Premier in Bristol for them to take a look: she also had a break in her exhaust pipe, and so 0700 on Monday saw me crawling under her to apply a "bandage" to the break in the exhaust, and then drive her to Winkleigh, where David Hoare's mechanic, Pete, will be taking a look at her and preparing her for her run to Duxford at the end of the month.

On Saturday we have the Open Doors Day in Bristol and LC8518 will be revisiting her old haunts whilst providing one of the free services between some of the open events: however, before this, on Friday she will be attended to by the electrician because one of the rows of interior lights just will not go out!! On Saturday, Malcolm Morgan and I will be piloting her and John Hitchins looking after the platform.

Another bus with electrical problems is 353 which is "not charging": hopefully this will be sorted soon as well.

After that, I must get 2467 ready for her trip to Kingsbridge (18th September), and 2815 to Chepstow to have her oil (mixed with water!!) changed and brakes adjusted for the trip to Cambridgeshire.

You can of course visit the collection at www.bristolbuses.co.uk, although there is an amendment pending to bring the site up to date.
Posted by Dr Mike at 09:12 No comments: