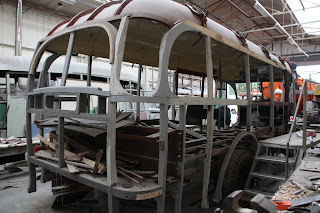 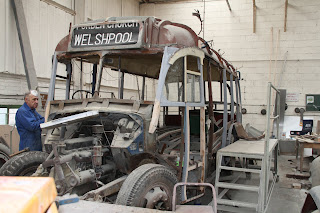 Throughout this year, work on Bedford OB bus MHU49, former Bristol Tramways 207, has been ongoing at TDC Bodyshops, Lydney. To date the body has been stripped and most of the wooden frame replaced, whilst the seats have been removed and stripped for re-trimming. It is possible that she will re-enter service in late 2011, but more likely to be 2012, when she will run alongside MHU193.
Posted by Dr Mike at 06:47 No comments: 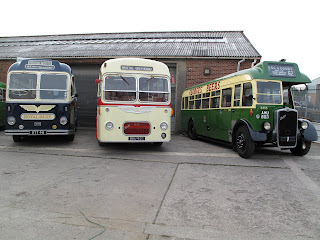 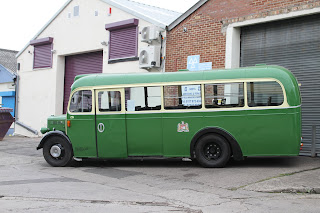 Last of the season

Yesterday, Sunday October 31st, was the last event of the season as far as the Collection is concerned: Peter Davey and I brought Bristol MW coach BHU92C and Bedford OB bus MHU193 up from Claverham for the day. As is the case with the beginning and end of the season, yesterday was a thoroughly relaxing day with a lot of talking, a lot of tea (and coffee!) and many old friends. MHU193 was used by Lionel Tancock to visit Bath Bus Company's yard, and I was able to talk through spares with Phil Sposito and Alan Neale and discuss present and forthcoming projects with David Hoare. He told me that, on stripping, a small part was found to be missing from Bristol LH 353s braking system, and this is now being sourced, hopefully ending her brake problems. During the winter he hopes to progress the engine replacement for LWL coach 2815, test MW coach 2150 and Bristol LD LC8518 to class 6 standards, bring 353 up to spec and also test her for a class 6 certificate. It is also hoped that the rust on the chassis of open top Bristol FS L8579 will be tackled, and Bristol K C3386 will come back from Scotland and be prepared for the road. On the way back to Claverham, Peter drove the OB, a bus that he had ridden on many times at Clifton College when he was at school there sixty years ago!

In two weeks time, Friday November 12th, it is hoped that Bristol KSW C8320 will go to First's depot at Lawrence Hill to take part in the Rememberance Service, has she has done in previous years.
Posted by Dr Mike at 06:27 No comments: