More For the Collection! 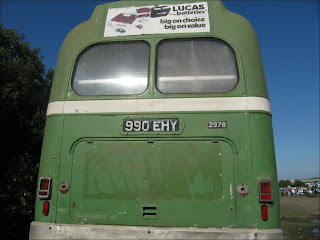 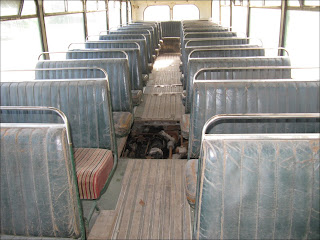 Although the Collection has owned three new vehicles for some months now, the opportunity has not been available to update the blog.

During August the Collection purchased two former Bristol Omnibus Bristol MW buses - 981EHY (2969) and 990EHY (2978) - which have been stored after being used as fruit pickers transport. One has good running units, but requires body attention, whilst the other has engine problems but a good interior. David Hoare and his colleagures moved them from Central Scotland to the Scottish Vintage Bus Museum at the time opf the Museum open weekend, and they have been stored there until the Collection decides what to do with them Hopefully, at least one will be on the road and attending rallies by late 2011. Mike Walker and Alan Peters share ownership of the buses.

During the late summer Mike also acquired Bristol Omnibus KSW6B C8319 (UHY359) from William Stanifort: she is a sister bus to the Collection's C8320 - C8322 is also preserved, by Adrian Hunt. The Bristol AVW engine has been removed and is shortly to go to Winkleigh to put in to LWL coach 2815 - whose engine has a cracked block. When C8319 eventually reaches the end of the queue for restoration, she will be fitted with a Gardner 6LW engine, in common with many of her sisters when they were running in service.
Posted by Dr Mike at 10:18 No comments:

With temperatures plunging to well below freezing, some extra checks have been made on the antifreeze of those vehicles whose parking places leave them to be most vulnerable to the dropping temperatures, and hopefully we shall get through this bad spell without losing an engine! Thanks to Pete Simper and John Hitchings for turning C8320 around so that her engine is now well inside the shed at Marksbury rather than facing out into the snow and winds!

Good news is that after much work on the brakes (and I believe a big bill to come!), LH 353 has now been returned to the road, and has gained a class 6 MOT into the bargain: she has been returned to store at Keynsham.

Attention is now turning to MW coach 2150: she is being prepared for a class 6 test in mid January, but because she has dropped off of VOSA's list of PCVs she has to have a full Certificate Of Initial Fitness (C.O.I.F.): attention will then turn to Lodekka LC8518, which will also need a C.O.I.F. If they pass, we will have two MW coaches, two LHs and two LDs with class 6 tests!

Olympian 9552 has been removed from under cover storage to Burnett with a view to getting her to Chepstow in early January: her MOT expired in mid December. Bedford OB 219 will need a new MOT on January 4th, and Lodekka L8515 at the end of the month.
Posted by Dr Mike at 10:09 No comments: