Malcolm kindly did some ferrying today, to begin the antifreeze check: 2467 has returned to covered storage, whilst 2150 has been removed ready to return to Chepstow for class 6 preperations; 2800 has also had her antifreeze checked. Those that remain will be checked over the next few weeks. 353 returned to Chepstow for repairs on her brakes (and a seemingly blown rear oil seal) and C2736 has now returned from her MOT and awaits returning to covered storage.

2138 is attending Bob Edworthy's Red and White event this Saturday, courtesy of Dave Fricker from North Somerset Coaches.
Posted by Dr Mike at 13:24 No comments: 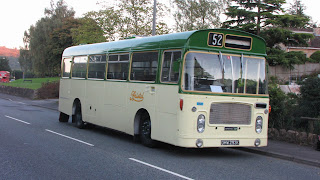 Email ThisBlogThis!Share to TwitterShare to FacebookShare to Pinterest
Labels: 353 at Bathampton on the way home with her brakes siezed on and awaiting recovery. 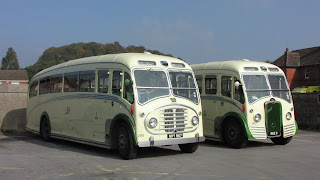 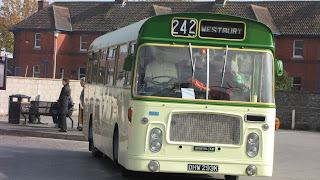 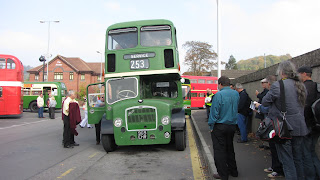 Email ThisBlogThis!Share to TwitterShare to FacebookShare to Pinterest
Labels: Alan Peters takes over from Roger Grainger at Warminster 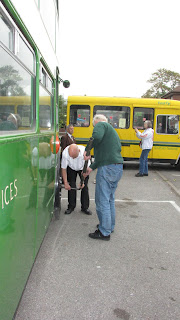 Email ThisBlogThis!Share to TwitterShare to FacebookShare to Pinterest
Labels: Dave Withers and Phil Sposito kindly change the wheel on L8089

We attended the Warminster Running Day on Sunday with five of the Collections' vehicles. As detailed before, 2467 and 2815 travelled down from Bristol "on service" and whilst there performed a Mystery Tour, before returning to Bristol as a "786" service, and both performed admirably.

L8089 and L8515 were brought down empty from Claverham: in the event L8089 had a slow puncture on the front offside and could not be used, its' all day duty card being given back to the "Inspectors" for covering - although Bristol LH 353 stepped in to operate the last trip. Thanks are due to Tim Tincknell for helping me with the spare wheel from NAE3, and to the excellent people from the Bristol Vintage Bus Group - particularly Dave and Phil - for actually getting down to it and changing the wheel over with the spare from NAE3. NAE3's spare had a 9.00-20 tyre, against L8089s 10.00-20, and so it was thought best not to use her, although she was able to return home safely at the end of the day: during this week it is hoped to get the puncture fixed and the wheels changed over again.

353 performed admirably - albeit with some comments about braking efficiences - and unfortunately on the return journey to Burnett the rear brakes siezed on and she had to be recovered to Burnett, where she awaits attention at the moment.

Thanks to all who helped, to Martin and Derek for driving the coaches - and Dave Cole's MW which we volunteered to cover -, to Peter and Roger for manning L8515 and bringing her and L8089 from Claverham, and to Malcolm for bringing 353 down for the day from Burnett. Thanks are also due to Tim and Simon Jennings, to Alan Peters and Mike Smith and to Andy Fear for taking a hand at the wheel and ensuring that I didn't have to!!

Now the rally season is almost over: a coach will be going over the bridge on Saturday to attend the Red and White event in Chepstow, organised by Bob Edworthy, and then a couple of vehicles will be going to the BVBG final open day on October 31st - and then we start the winter maintenance programme to be ready for next year!
Posted by Dr Mike at 14:23 No comments:

This Sunday is the Warminster Running Day: 2467 and 2815 will be running from Bristol, picking up at the Bristol Fashion at 0840, arriving Warminster at 1000. they will return from Warminster at 1720.

L-type C2736 has gone to Chepstow for its MOT, and C8320 has returned having had its brake adjusters repaired.

In addition to the Warminstere event, other group vehicles will be in use during the weekend: