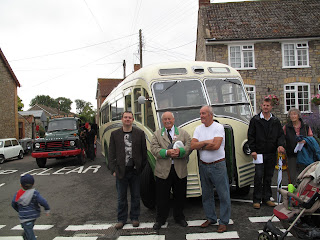 Email ThisBlogThis!Share to TwitterShare to FacebookShare to Pinterest
Labels: 2467 at Wedmore Harvest Home on Friday last

At Wedmore Harvest Home's vehilce display on Friday last, the Collection's Bristol Greyhound coach 2467 came first in its class - yes, I know that there were only two entries, but it triumphed over a Bedford J-type lorry! It was a lousy journey down from Burnett to Wedmore, with heavy rain and low mist, but the weather improved as soon as Cheddar was reached. Of course, 60 years ago, when 2467 was new, she would have visited Cheddar many times on tour from Weston super Mare or Clevedon.
Posted by Dr Mike at 04:43 No comments: 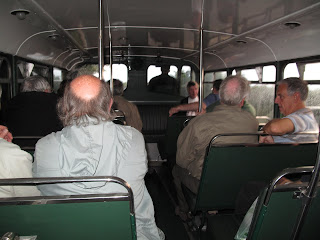 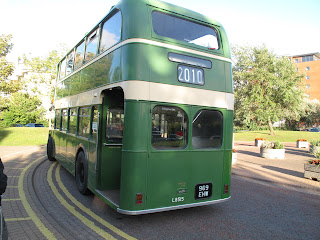 It is a busy week for the two principal class 6 vehicles in our collection.

On Tuesday, George Vowles, known to many of us as the most senior "Bristol" enthusiast, celebrated his 92nd birthday, and, at his request, Malcolm Morgan took BHU92C along to his sheltered housing in Burnham and gave George and his friends a few hours out at the seaside.

On Wednesday, I took L8515 over the bridge to give the Cardiff Transport Preservation Group an evening tour, arriving back at the base at Claverham at 2330, having covered 150 miles at just over 14 miles to the gallon. On the way over I called in to see David Hoare to collect a spare wheel (you can never be too careful!)and David kindly adjusted the engine idle speed so that you can now do professionally sounding gearchanges!

Today, both L8515 and BHU92C are off to Gloucestershire, on a private hire for North Somerset Coaches: I can imaaine the conversation that took place between the two buses last night when I parked L8515 next to BHU - "Don't you think that at our age we should be given a little rest? All these late nights and long journeys." "Still, it's better than a trip to Barnsley.....!"
Posted by Dr Mike at 02:15 No comments: 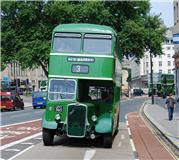 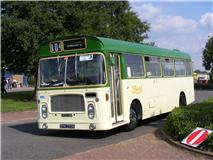 Sunday August 15th was one of two very busy days in our callender, for it was the day of the joint event between the Bristol Vintage Bus Group and the Avon Valley Railway, held mainly at the Brislington Park and Ride site in south east Bristol. For this event, and the Harbourside event in May, our aim is to have as many of our vehicles that are roadworthy present as possible - and this year we managed 18, let down only by L8579s absence for repair.

Getting 18 vehicles to a rally, when your group has 3 members, is a logistical nightmare! However, we are lucky to be able to call upon the services of a number of friends who come from as far afield as Winchester, London, Essex and Norfolk to drive for us! To you all, and you know who you are, a big thank you.

Preparing bus and crew workings is also another time consuming problem, both in trying to get a "balance" of vehicles on succesive departures and trying to give the drivers a fair variety of vehicles to drive, and in the case of one or two people, specific vehicles that are their favourites. And I wouldn't have it any other way, since the preparation of bus and crew workings once formed a vital part of my job, and it is a pleasure to re-use old skills.

The day couldn't have gone better. Of course, there were problems: city KSW C8320 suffered from flat batteries but was jump started thanks to David Fricker's start pack, and FLF C7246 caught fire (!) - albeit only the door motor: a quick call by Alan Peters to electrician Richard Groves saw the fuse being pulled and all was well - but we did have the opportunity to use a fire extinguisher for the first time!

New acquisition Bristol LH6L 353 saw stirling service and was probably the most used bus of the day, and as always the KSW Kavalkade was very popular - although due to roadworks in Brislington, instead of 36 minutes the round trip took over an hour!

Another noteworthy operation was the running of what I believe were three Bristol REs together - I scheduled two (Abus and North Somerset Coaches) and I believe that the Crosville bus joined in as well.

Monday saw buses being returned again to storage, although C8320 has gone to Chepstow to have the brakes tightened and batteries sorted out, and 2150 went with her for C.O.I.F.ing (we hope to get her to class 6 standards to run with 2138).

Whilst talking about 2138, she is kept busy by David Fricker of North Somerset Coaches,and was used on a wedding the day before the rally, and very nice she looked too. When David sends me a photo of the event, I shall post it here.

On another matter, later today I shall be taking L8515 to Cardiff to take members of the Cardiff Transport Preservation Group on an evening run, and on Friday I shall be taking 2467 to take part in the Wedmore Harvest Home Festival.
Posted by Dr Mike at 01:29 No comments:

Getting ready for Brislington

It is of course the Brislington Rally this Sunday coming: today, Martin, Malcolm Morgan and myself have been collecting buses from far and wide.

All being well, the following will be "in service" at Brislington:

It was the Kemble event last Sunday. The Collection entered three vehicles:

l8089 was taken up by Peter Davey, her former owner: she was at one time stored here when owned by Geoff Green and The Bristol Aerospace Collection also had a collection of buses.

L8515 was taken up by Malcolm Morgan: L8515 also lived here at one time, when she was also owned by Geoff Green, and it is here that most of her restoration was undertaken by Geoff before Alan Peters and I finnished the job.

9554 was taken up by Martin Curtis - and the run thankfully proved that - like her gearbox itself - gearbox problems are behind her!
Posted by Dr Mike at 10:49 No comments: 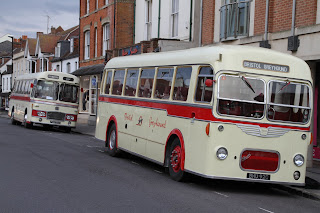 Email ThisBlogThis!Share to TwitterShare to FacebookShare to Pinterest
Labels: 2138 and 2150 parked up at Marlborough yesterday, just as they may have been 40 years ago whilst operating the London to Bristol service.
L8515 was kept busy yesterday at the Ilton Festival of Transport giving rides along the runway - and allowing the drivers to hone their gear changing skills!

The trip to Fawley Park went exceptionally well and both coaches performed admirably: the last mile and a half from the Henley to Marlow road was up a single track lane (with passing places) and the coaches were pushing the tree branches out of their way as they went!. When we arrived at the site there was some doubt expressed by the car park attendant as to whether we could get the coaches down into the display area, but after another narrow avenue of trees and some manouvering through gates and between railway rolling stock we were able to park up - but when it came time to leave we had to reverse the coaches up hill and perform a three point turn in the narrowest of roads!

On the return journey we stopped at Marlborough for dinner - thank you all at the Wells Railway Fraternity: 2138 and 2150 were parked up in the main street whilst we ate - just as they would have been over forty years ago when taking a break whilst operating the London to Bristol service!
Posted by Dr Mike at 03:40 No comments: