It's been a while since I posted here - what with much of the recent weeks being spent with bus/driver duties for the Harbourside Rally on Sunday, and constant changing as drivers changed and buses became unavailable and then available again!

Well, the big day is Sunday, at Harbourside, Bristol, and we are getting as many of our fleet there as we can.

At Harbourside and in service will be:

353 will be there as a static exhibit only, as she still has no second gear (more anon!)

2815 is still away in Winkleigh having her engine rebuilt

L8579 still awaits welding on the chassis so that she can get through her Class 6 MOT test.

C3386 has made it to Chepstow but an amount of work remains to be done to her and so, hopefully, she will debut at Brislington in August.

Funally, I understand from Dave Hoare that 2800 will go for MOT tomorrow (this was delayed because she was found to have a rear axle oil leak). If she passes, and I can get to collect her, she will become the spare bus.

Apart from the Dundry service, Gary Williams has allocated us the 28 service in its entireity, every 15 minutes to Sea Mills, continuing hourly to Avonmouth, with the Avonmouth extensions returning as service 99 along the Portway, which also operates out to Avonmouth from Harbourside at hourly intervals.

As we go into the 2011 Rally season, I thought that reader's would like a current update on the status of the Collection's vehicles.

At present the breakdown of vehicles is as follows:

In total therefore we have 29 vehicles, 20 of which are ready and roadworthy for this season (barring, of course, breakdowns and running repairs), with one other, the K-type, C3386, expected at some time this year!
Posted by Dr Mike at 15:25 No comments: 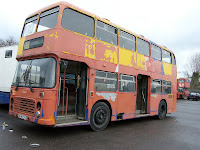 Martin Curtis and his son Tom have added another one to the collection! They have acquired former B.O.C. 5150, AHW201V, from David Hoare, where it was latterly used for special events under the name "Orangeade"! It is a 1980 dual doorway former Bristol City bus, and will be the first VR in the collection, although ABus's remaining VR is often included in the Collection's running days because it is of course owned by one of the Collection's members. A great deal of work is necessary to get 5150 back to its original condition, but Martin and Tom hope to have it running by the summer.
Posted by Dr Mike at 15:18 No comments:

FIRST EVENT OF THE SEASON! 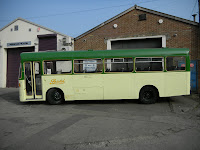 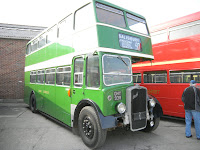 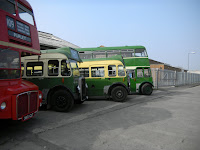 Everything went well on Sunday, March 27th, at the Bristol Vintage Bus Group's open day, and the Collection was represented by 353, C2736, L8089 and C8320,the latter two taing part in the timetable of free bus routes operated by the Group.
Posted by Dr Mike at 11:13 No comments:

Email ThisBlogThis!Share to TwitterShare to FacebookShare to Pinterest
Labels: Members of the Collection at Flowers Hill

On the weekend of March 17/18/19 9552 was used by The Avon Scouts to support their annual Night Navigational Exercise, for the "Rickard Shield": photos by Tom Curtis
Posted by Dr Mike at 10:54 No comments:

Email ThisBlogThis!Share to TwitterShare to FacebookShare to Pinterest
Labels: 9552 as the night walk control room

There has been no post here for a while, although behind the scenes things have been going on to ready the collection for the season. I will soon post some details of a new acquisition and what has been happening to the fleet during the really bad winter, but this post is to remind everyone that the Bristol Vintage Bus Group (www.bvbg.org.uk) is holding their first open day of the season this Sunday, March 27th, at Flowers Hill. The Collection will be represented by:

L8089, which will be brought up by Peter Davey
C8320, which was used earlier this week as a "backdrop" to the memorial service for former FirstGroup manager Alan Willoughby
353, which still has a slipping second gear, but arrangements are in hand to repair that.

The next major event for the Collection will be the Bristol Habourside Rally on May 22nd. If all goes well we hope to have up to EIGHTEEN vehicles there! More than some independent operators actually own!
Posted by Dr Mike at 02:31 No comments: